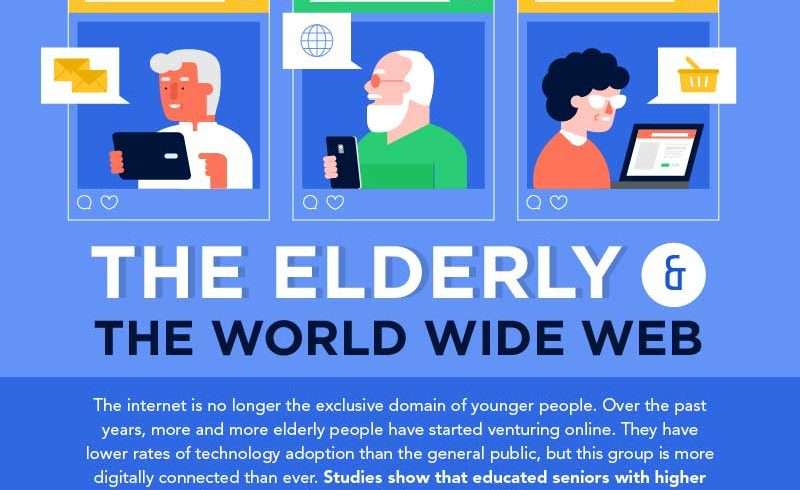 One thing that you might not often hear in a sentence is elderly and technology. This demographic is known to be the least tech-savvy of them all. However, in recent years, we’ve noticed a surge in seniors using technology, and this number is only expected to increase.

From laptops to smartphones and even home assistants, the elderly are trying it all. Although they might not use these gadgets as religiously as the other demographics, they are still slowly but steadily becoming accustomed to the modern-day technologies and what they can offer.

How well do the elderly adopt new tech trends

Today, we have so many gadgets that it’s becoming hard to keep track of all of them. Although the younger generation use all or most of them, people at the age of 50 and above prefer to use one device over another. The most popular device being the smartphone…while a close second is the laptop.

This demographic also uses desktops and tablets, while regular cell phones are most popular with people who are 70 and above. The least popular devices are wearables, e-readers, and home assistants. Our friends at MediaAlertHelp present an exact statistical overview of how well older adults adopt these devices in an infographic below.

Although most of us are used to our smartphones and really can’t function without them, there are still users that swear by their cell phones. As the folks from Pew Research Center suggested, people around the age of 65 and above actually prefer to use any kind of cell phone rather than smartphones. Although seniors prefer them, they wouldn’t notice a difference in their preference as they become older, only that they use both of these devices less over time.

How do seniors check their emails?

One of the most common things that seniors do while online is check their emails. So what device do they use? As it turns out, EmailMonday revealed that, in this regard, the elderly aren’t that different than the rest of us, since 62% of them tend to check their emails through their smartphone, while 30% use desktops and laptops, and only 8% use tablets. So it seems that although the generation gap is huge, everyone still prefers to go the simple route when doing something as simple as checking emails.

Although technology was once something that was mainly attributed to the younger generation, a lot of things have changed as time passed. More and more people are becoming dependent on at least one technological device, and it’s not only the Millennials. The infographic below provide details, which will help us see where Baby Boomers are with technology and what we can expect in the future.