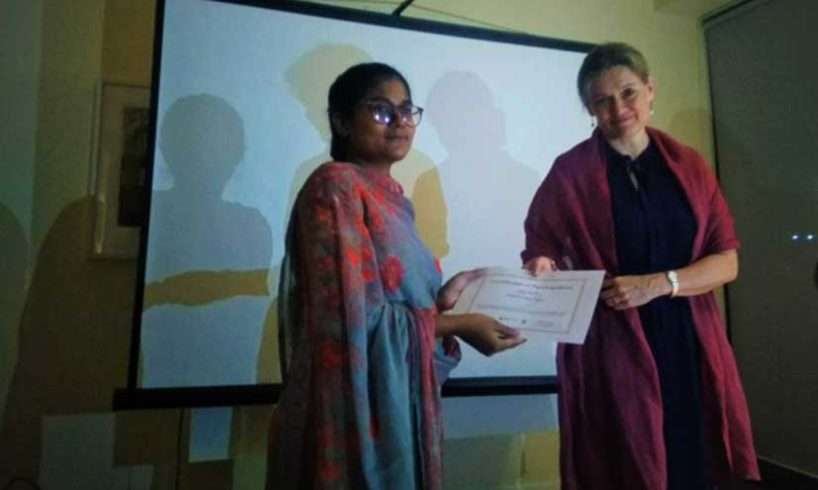 Worldwide Open Encyclopedia Wikipedia, a campaign titled “Wikigap” organized to increase women’s participation and information on women, was held on May 3-17, 2019. In the 15-day long article writing competition, to enrich women’s information in Bengali Wikipedia, the top 10 are rewarded by the Swedish Embassy of Bangladesh.

Swedish Ambassador to Bangladesh Charlotta Schlyter gave a certificate to the top 10 Wikipedia contributors on Sunday in a function organized by Wikimedia Bangladesh, other international organizations and journalists at his residence.

Swedish Ambassador Charlotta Schlyter said, “In Sweden, the Swedish chapter of the Wikimedia Foundation, Wikimedia Sweden and the Swedish Ministry of Foreign Affairs jointly started the campaign called WikiGAP to increase women’s content in Wikipedia and encourage women’s participation in Wikipedia. The campaign, created for the creation of gender-equalization of the Internet, has been expanded to local languages, with local Wikimedia chapters working on Swedish missions and Wikipedia in other countries.

He also said, “As the world’s first country, Sweden has adopted Women-friendly foreign policy. To reduce Wikipedia content gaps on the Internet, they have expressed interest in working with other similar local organizations, including Wikimedia Bangladesh.

‘Wikimedia Bangladesh’ and the Swedish Embassy of Dhaka jointly started the ‘WikiGap’ campaign last year. As a part of this, in early 2018, the Swedish Embassy organized a workshop on Wikipedia with representatives of various international organizations. In the second step, they organized a competition for writing articles on Bangla Wikipedia where about 34 new articles related to women were created in the Bengali language.

An article competition was held in the Bengali Wikipedia on May 3-17, as part of the WikiGap campaign in 2019. In the competition, Bangla 640 new women related articles were created by the 62 participants in the competition.

It is to be noted that in the year 2018, the Swedish Mission and local Wikimedia chapter of 60 countries including Bangladesh organized this campaign, through which 1800 participants contributed to Wikipedia and created 13,000 women’s articles on Wikipedia. This campaign was organized in 50 countries in 2019. In the year 2018 and 2019, two thousand 450 participants from 60 countries contributed to 30 Wikipedia language versions, including Bengali, and created 27,000 women related articles on Wikipedia articles.